“I have often seen among the inhabitants of the log-houses of America, females with dresses composed of the muslins of Britain, the silks of India, and the crapes of China.”

In the first half of the decade, fashion in America was still affected by the trade embargo and the War of 1812.  Patriotic fervor and simple necessity spurred Americans to produce more of our own textiles. Scores of spinning and weaving factories sprung up. Not all processes were yet mechanized; often a “factory” referred to an enterprise with multiple weavers and multiple stages of textile processing under one roof. Others might have machinery for carding, spinning, and fulling (finishing wool after weaving). Water power was in use by the 1780s in some factories.

When the war ended in 1815, we could import fabric from Europe again. Unfortunately, England’s surplus—stockpiled during the hostilities—flooded the American market, driving prices down, to the enormous disadvantage of our own fledgling textile industry. On the bright side, we were flooded with gorgeous, colorful printed cottons, which were hugely popular and widely affordable.

The homespun debate became relatively pointless. Americans would follow European fashion and continue to import fabrics, while our textile industry would continue to grow. What was truly American about fashion was its democracy. As foreign travelers often commented when they visit, we had few class distinctions: almost everyone could dress fairly fashionably, at least for Sunday best. As James Flint noted in his Letters from America (1818-20), “On Sundays it would be difficult to discriminate betwixt the hired girl and the daughter in a genteel family, were drapery the sole criterion. …The symptoms of republican equality are visible in all the members of the community.”

In the latter part of the decade, women’s dress styles began to move away from the slim, high-waisted neoclassical style. Skirts very gradually widened, a long-term trend that ended with the enormous hoopskirts of the 1860s. The waistline began its gradual descent to the natural level—which would not be complete until after 1830. Puffy sleeves also came into fashion, growing to absurd lengths by the 1830s.

Menswear’s changes were less dramatic, consisting of subtle changes in tailoring and the more widespread adoption of trousers. 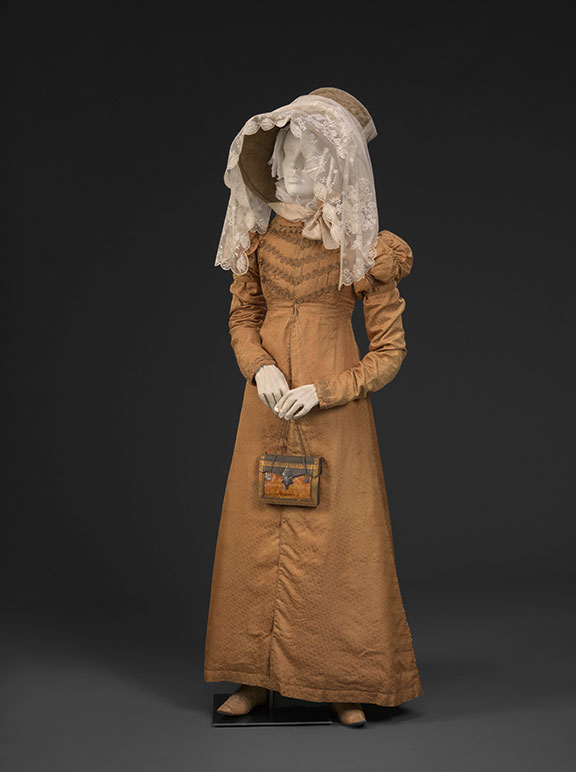