Style: This simple muslin dress makes an effort to be reasonably up-to-date and well-fitted. Its waist is high and its neckline low, in line with contemporary fashion. The bodice front’s flaps are frugally made with multiple pieces, yet are also cut to fit snugly to the body, a curious mixture of making-do and making an effort. It was most likely worn around the home.

The apron is a reproduction. Blue checked cotton was widely used; many aprons of this time are pinafore-style, with an upper part and either arm holes or straps.

Fabric: The plain white cotton would have been inexpensive. Though white may seem impractical because it was easily dirtied, white clothing and bedlinens were often boiled in the laundering process.

Blue and white checks were extremely common for utilitarian garments such as aprons, kerchiefs, working men’s shirts, and in larger scale for furnishing textiles (such as window and bed curtains).

Brown and white or blue and white checked “handkerchiefs” (so called despite being worn at the neck) were also extensively worn.

After 1800 caps were no longer required for all women; they were now prescribed only for older and married ladies. However, a cap protected the hair from the potentially dirty chores in which a working woman engaged. Similarly, hair that could not often be washed could be hidden under a cap, which would absorb some of the hair’s oils. The cap pictured here is made of sturdy cotton, but has nevertheless been embellished with ruffles. It may have been either a day or night cap. 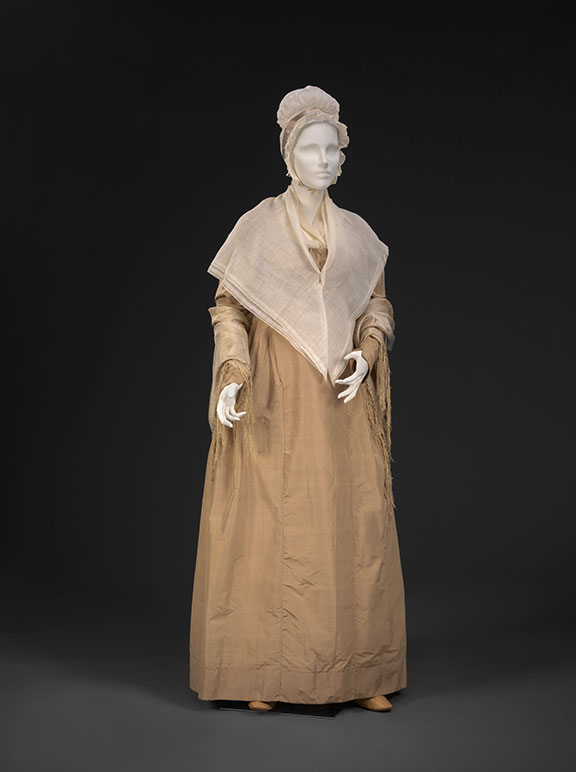