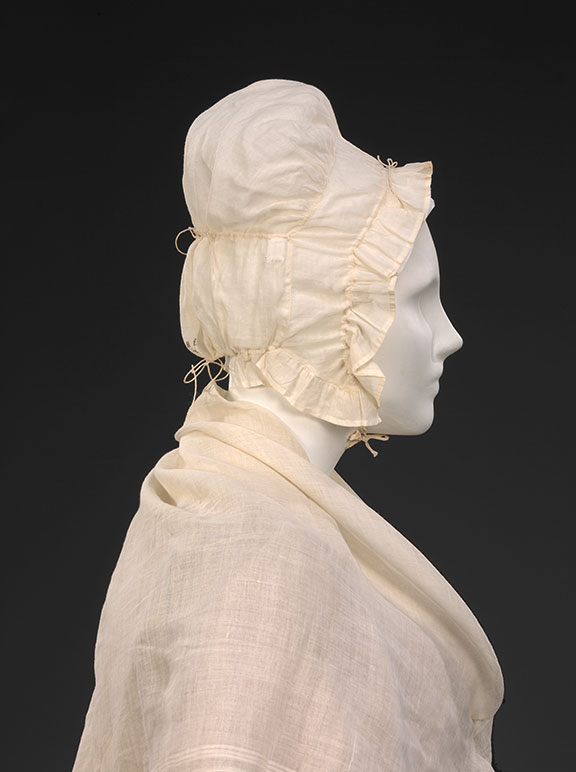 Style: The Religious Society of Friends (usually abbreviated as Friends, or known as Quakers) dressed “plainly” as part of their approach to spiritual life.

The goal was to avoid ostentation, whims of fashion, and superfluous ornament in order to reject the world’s vanity (for example, trims other than piping and pleats were frowned upon). But unlike some other dissenting sects, the Quakers wanted to avoid creating a uniform.

Later in the 1800s, Quaker women’s styles stagnated and became “fossilized” for some time; but in the early 1800s, Quaker dresses still kept up with contemporary fashion. The raised waistline, elongated sleeves, and  drawstring neckline of this dress echo popular styles at the time.

Fabric: “Dressing Plain” meant, among other things, choosing subdued colors. Grays, tans, pale golds, and olive greens were common choices. Solid colors were the norm. There was no prohibition of costly fabrics, so Quaker dresses often use high-quality silk taffetas and satins. This dress is made of tan silk.

Caps and kerchiefs (Quaker women wore two kerchiefs, one tucked into the neckline and one draped above it), the standard proper coverings for all women until the end of the 1700s, were retained by the Friends long after they went out of fashion in the 1800s.